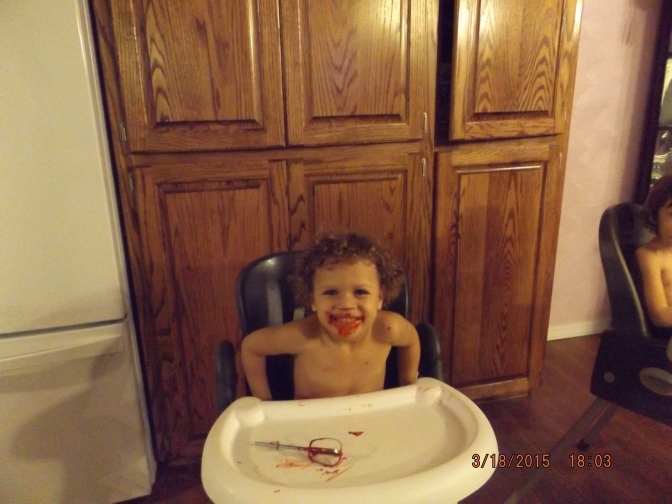 I wonder how many people would survive a day in my shoes!! No really, I don’t mean wear them, although that is tricky too, I mean *experience* the things I experience with my warped mind in “MY” world! 🙂

Today started out pretty much the same old grind. I didn’t sleep well until it was time to get out of bed, so I got up thinking I should stay in bed. That was not possible though because I had to go to the lab in the hospital for routine blood work and since I had to fast, a morning trip seemed prudent.

Greyson slept with me. He always announces when the sun comes up. He’s such a good boy!!

Being in that comatose state from lack of sleep, I nearly jumped out of my bed. I got hold of my senses long enough to tell him good morning and go find papa while I showered.

Pa decided to go to Ada with me so that meant a day out with the guys. Ummm, that meant Greyson was going! Gulp!  There is always an adventure where he is concerned. I girded up my loins and loaded into the car.

“Where we going gramma?” he asked.

“No, I’m going to get some blood drawn.”

That raised his voice an octave higher, “OHHHH Can I watch? Will it hurt? Are you sick?”

“Just your arm is sick?”

“No, they are just going to get a little bit of blood.”

“NO!!! I want them  to get a big one. I don’t like little ones,” he declared emphatically.

“Look at the clouds Greyson, aren’t they pretty?” said I, thinking to change the subject.

Finally we made it to the hospital. Jerry held him up to the window so he could watch them stick me. He loved every second of it. I was so glad I could be of help! I’m such a good gramma to provide that level of entertainment!

Next we went to eat breakfast. He ordered an omelet but was mesmerized by the little packets of strawberry jam on the table. I opened one for him and spooned it into his plate. It lasted less that one second. He reached and got another one. This time he spooned it straight into his mouth.

He reached for the third one and I admonish him, saying, “You shouldn’t eat your jelly like that. Put it on your toast.” Smug and satisfied I had handled the problem I turned to say something to Jerry and when I glanced back around, he was licking the jelly off the toast.

Wow, I didn’t see that one coming! Jerry and I smiled at each other. That kid is a mess.

It was time to go home. All of us were tired, we had gone to Walmart and Home Depot. By the time we made our rounds, we were like whooped puppies.

We buckled Greyson in and headed towards the hacienda. About a mile down the road we passed a cattle truck. There was an offensive odor radiating from it as we passed.  I didn’t pay any attention at all to it, I was thinking about home and how glad I would be to get there.  My thoughts were rudely interrupted when  I heard a disgusted voiced from the back seat.

He said, “Man somebody in this car stinks! They better go wipe their butt!”

Jerry and I could not hold back. We both erupted into fits of laughter. I tried to tell Greyson what the awful smell was but he was tooooooo offended to listen.   Soon after he fell asleep. WHew! I’m so glad for the little things in life!